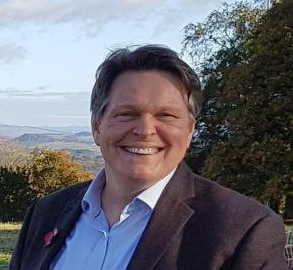 Stephen Kerr is the Member of Parliament for Stirling.

Stephen Kerr has lived in Stirling, with his wife Yvonne and their four children, since 1982. He was the Conservative candidate in the 2005 and 2015 General Elections, on each occasion increasing the Conservative vote by 25% and 10% respectively. As Chairman of the Stirling Conservative Association Stephen is a committed community activist. Before his election Stephen was a Sales Director for Kimberly Clark.

Stephen Kerr was born in Dundee in 1960. He was raised on a council estate in Forfar, Angus. His father was a butcher to trade and worked for the local branch of the Coop. His mother was a shop assistant.

He attended a local primary school and later, Forfar Academy.

He left school at 16 to work as a bank junior.  After returning from a two year period of church voluntary service in London, Stephen graduated from Stirling University with a honours degree in Business.

His career has largely been spent working in business, mainly in sales and marketing. His role immediately prior to his election involved heading the sales teams for an international company (Kimberly Clark) in the UK, Ireland and France.

He stood previously as a Conservative candidate in the 2005 and 2015 General Elections and was finally successful in 2017 where he was sent to Parliament to represent the Stirling Constituency. Since joining parliament Stephen has continued to speak up for Stirling and has set up an office to give help and support to people throughout the constituency. He has also been appointed to the Business Energy and Industrial Strategy Select Committee where he brings his business experience to bear on Government policy.

He married Yvonne in 1983. They are the parents of four adult children and eight grandchildren. Yvonne and Stephen have lived in Bridge of Allan since the 1980s.

This website uses cookies to improve your experience while you navigate through the website. Out of these, the cookies that are categorized as necessary are stored on your browser as they are essential for the working of basic functionalities of the website. We also use third-party cookies that help us analyze and understand how you use this website. These cookies will be stored in your browser only with your consent. You also have the option to opt-out of these cookies. But opting out of some of these cookies may affect your browsing experience.
Necessary Always Enabled

Any cookies that may not be particularly necessary for the website to function and is used specifically to collect user personal data via analytics, ads, other embedded contents are termed as non-necessary cookies. It is mandatory to procure user consent prior to running these cookies on your website.